A few days ago, we got back from a trip out west.  The main reason for the trip was to visit Mr. M's Dad, sister, and brother-in-law in Colorado.  We saw them last year at Mr. M's Mother's memorial service, but it was nice to see them again this year.

Our younger son's visit there overlapped ours by about a day, so it was nice seeing him also.  He is moving back to our area from Las Vegas this summer, so he brought along a car load of his things for us to bring back with us.

On our way home, we visited the Black Hills.  We've been there a few times before, but it's always nice to go through such a beautiful area. There's a tree growing right on the top of this rock formation. 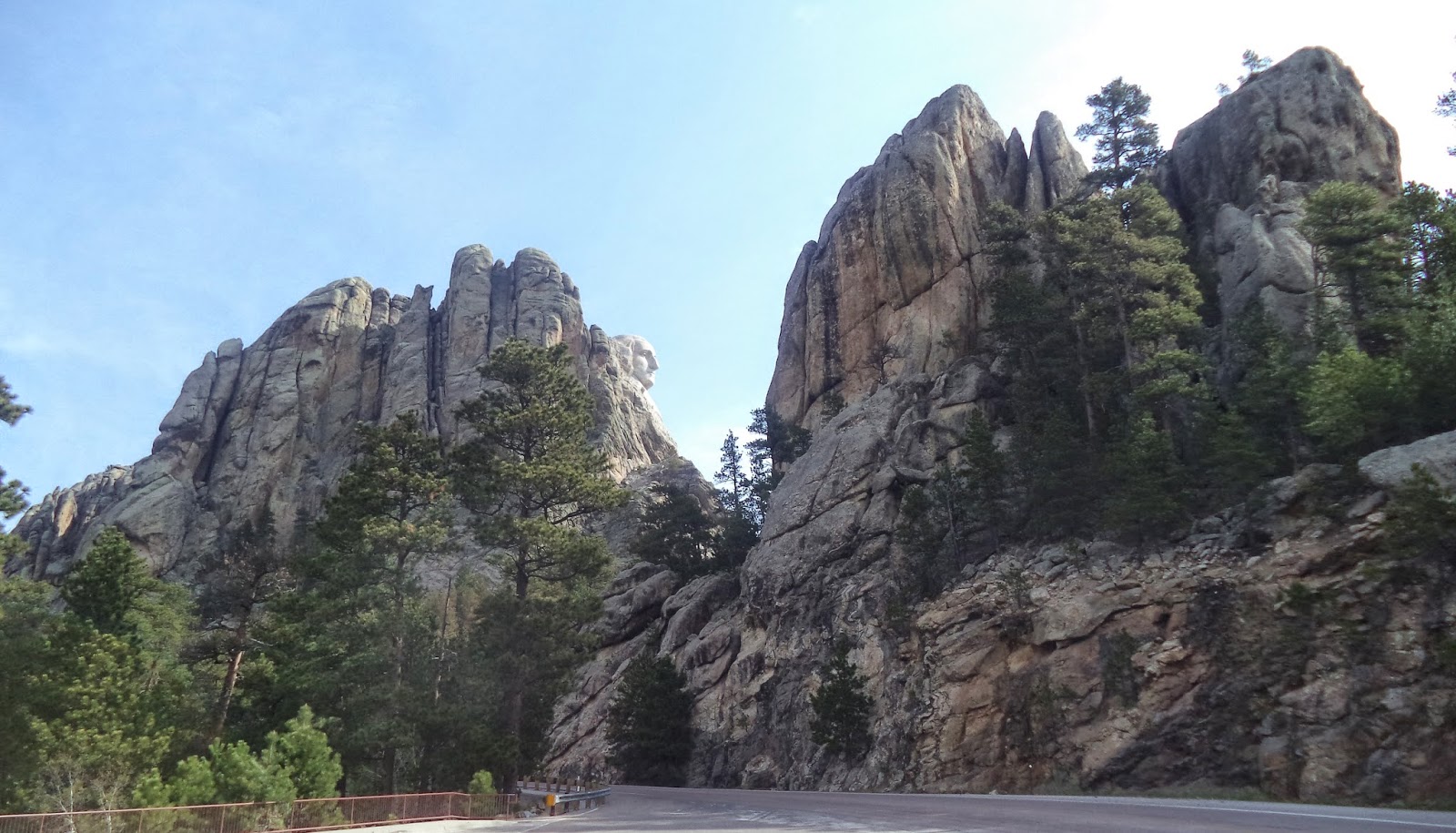 This is a view that we missed the other times we were here.  It's the side of Mount Rushmore. 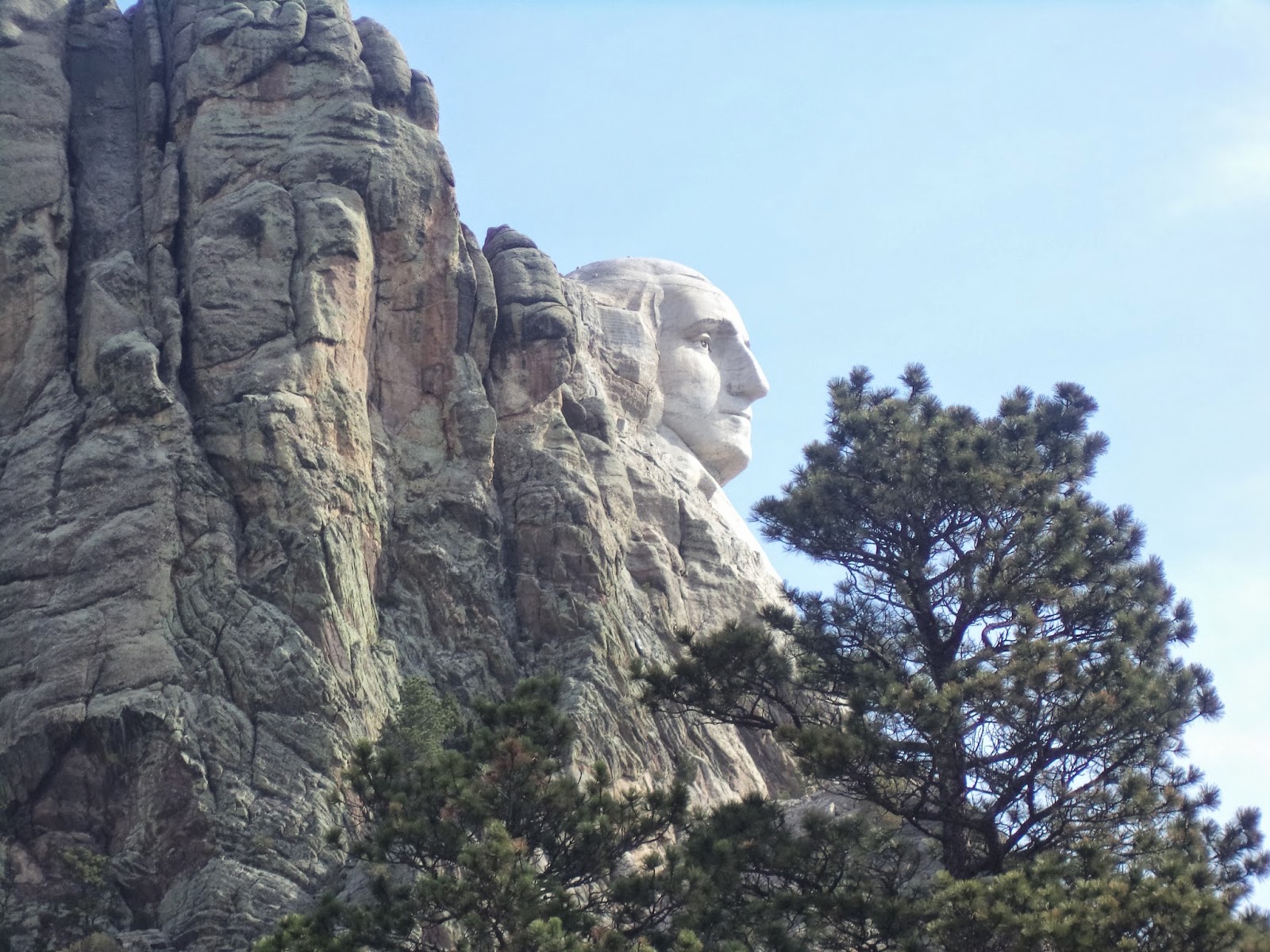 Here's a close-up of that same view, showing the side of George Washington's head.  It was a surprise to be able to see it from this vantage point.


Below are a couple of interesting cloud formations that we saw as we were traveling across South Dakota.  We had such great weather the whole time we were on the trip. 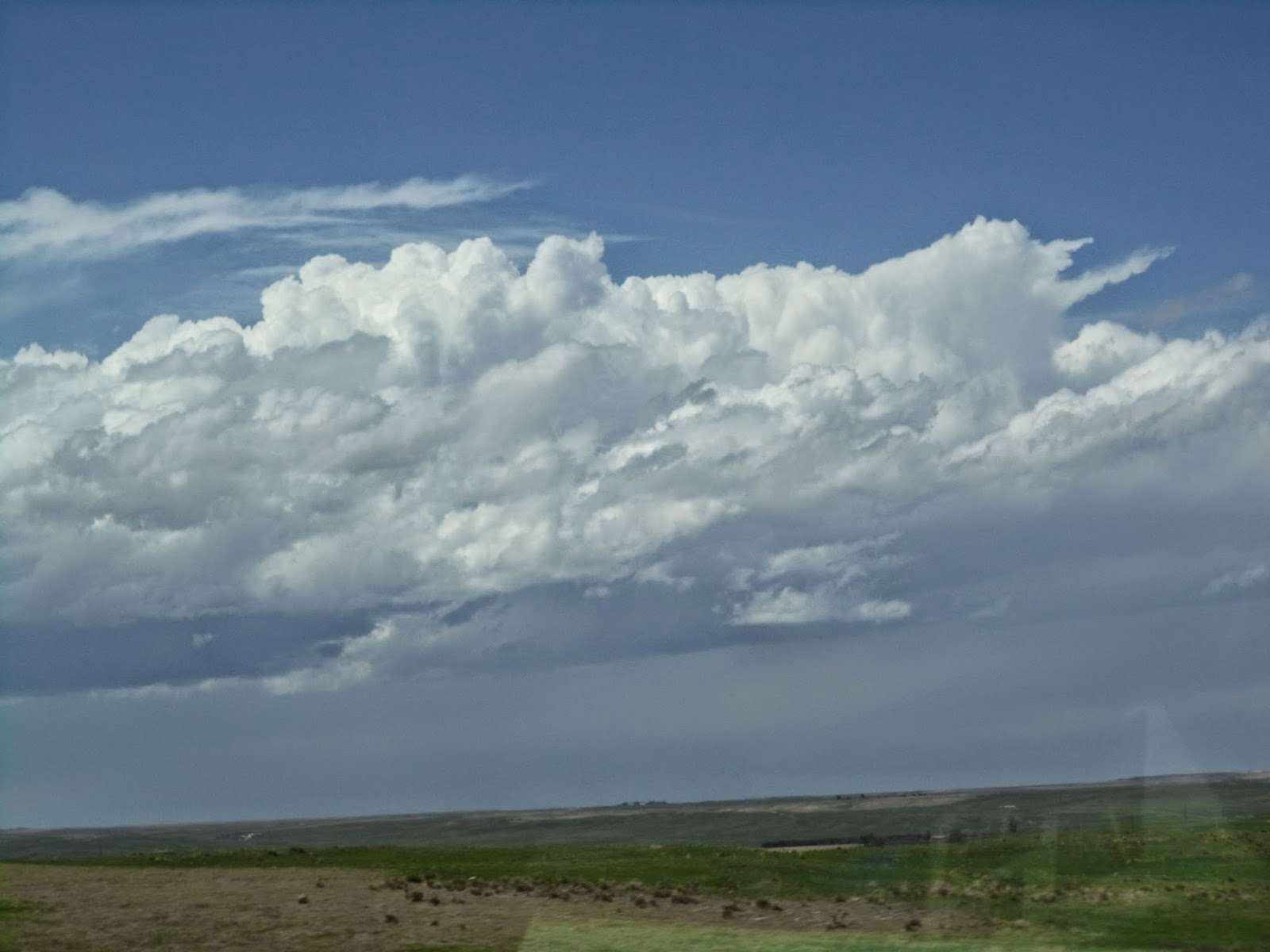 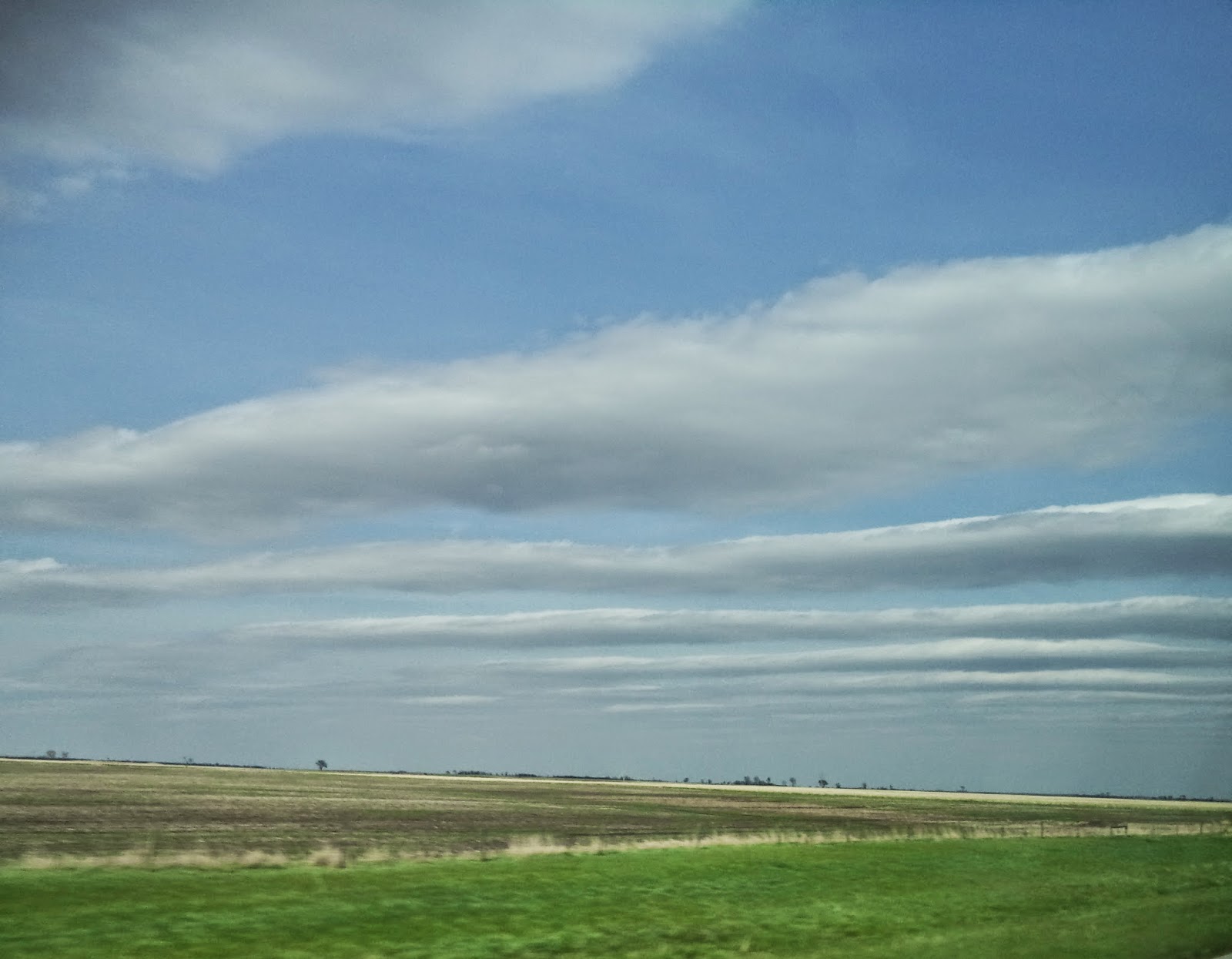 This one was several long strings of clouds, which I thought was quite unusual.  Maybe not, but I had never seen any like this before.


And a cute little duckling near a pond at Al's Oasis.  There was a second one but it wouldn't stand still long enough for me to get a picture. 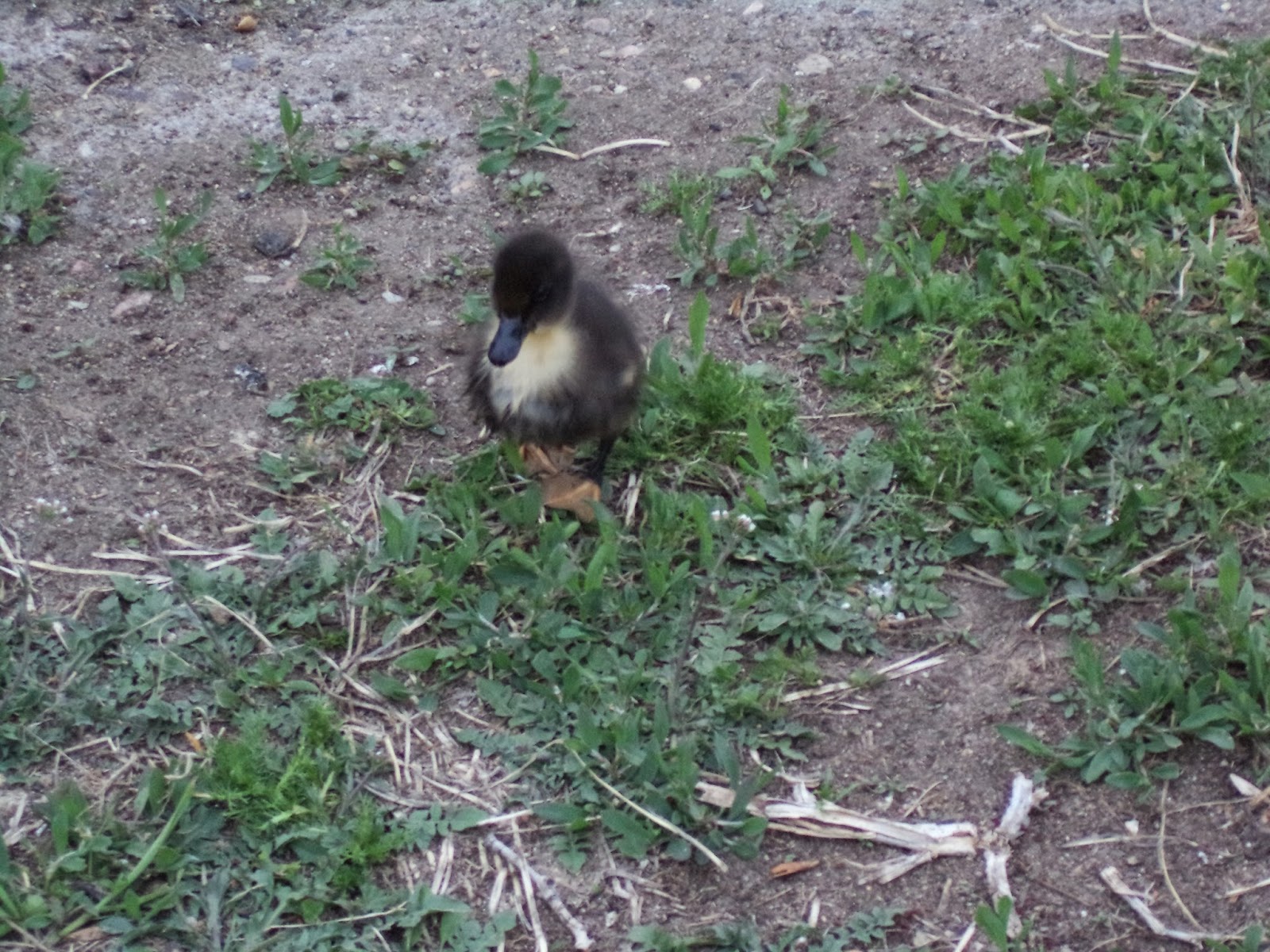 It was a good trip, but it's always nice to get back home again.

The garden is entirely planted and mulched.  Now we wait for fresh veggies, although we have been eating lots of asparagus the past week or two.  So good!

Posted by Meadowcreek at 2:15 PM No comments:

A few weeks ago when I was visiting my daughter, we went to a few estate sales.  One of the things I found was a small drawer unit. It was full of nuts and bolts, etc., all of which I gave to Mr. M.

There are 60 drawers, and I thought it might work well for storing all of my embroidery floss. 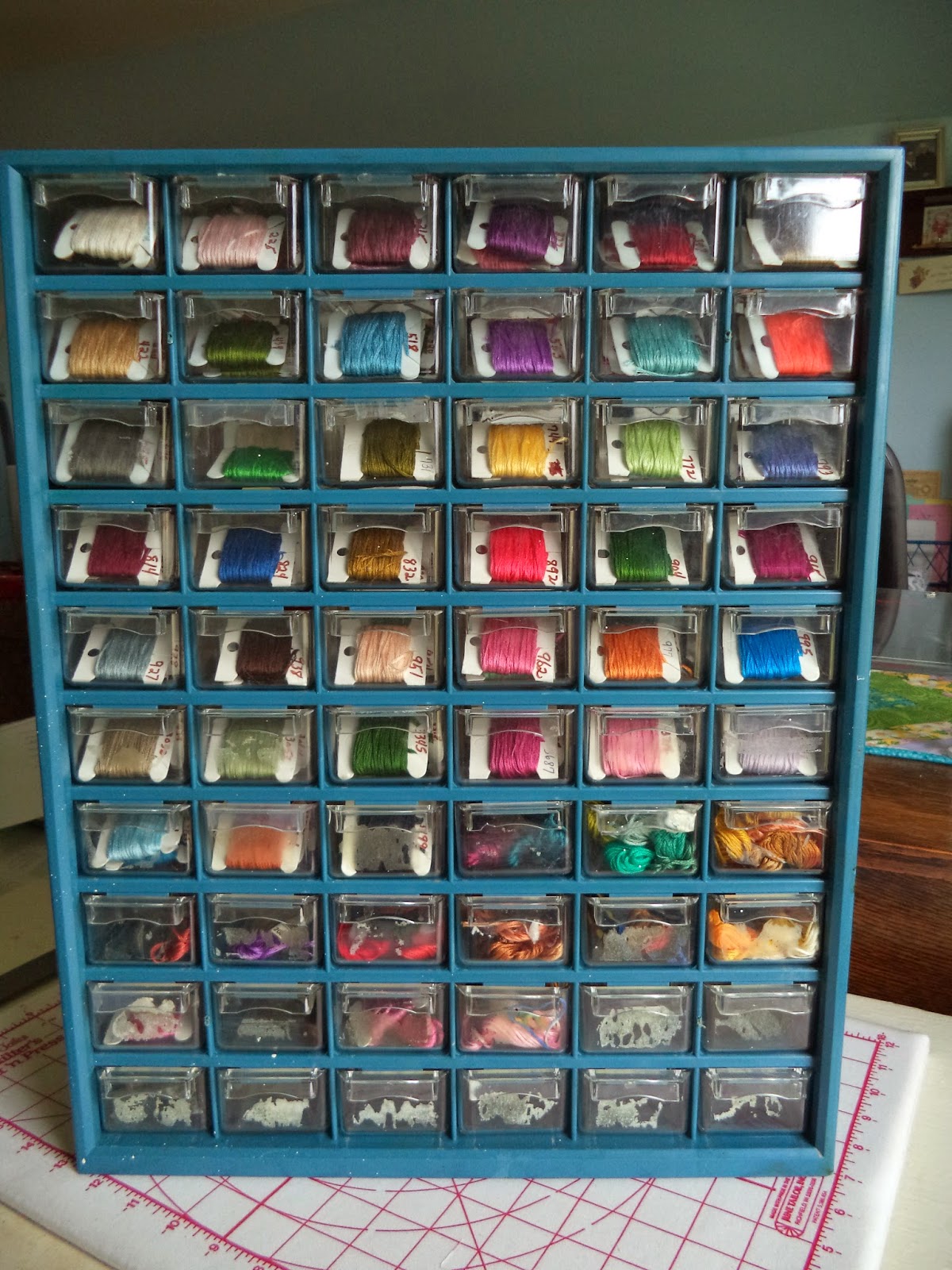 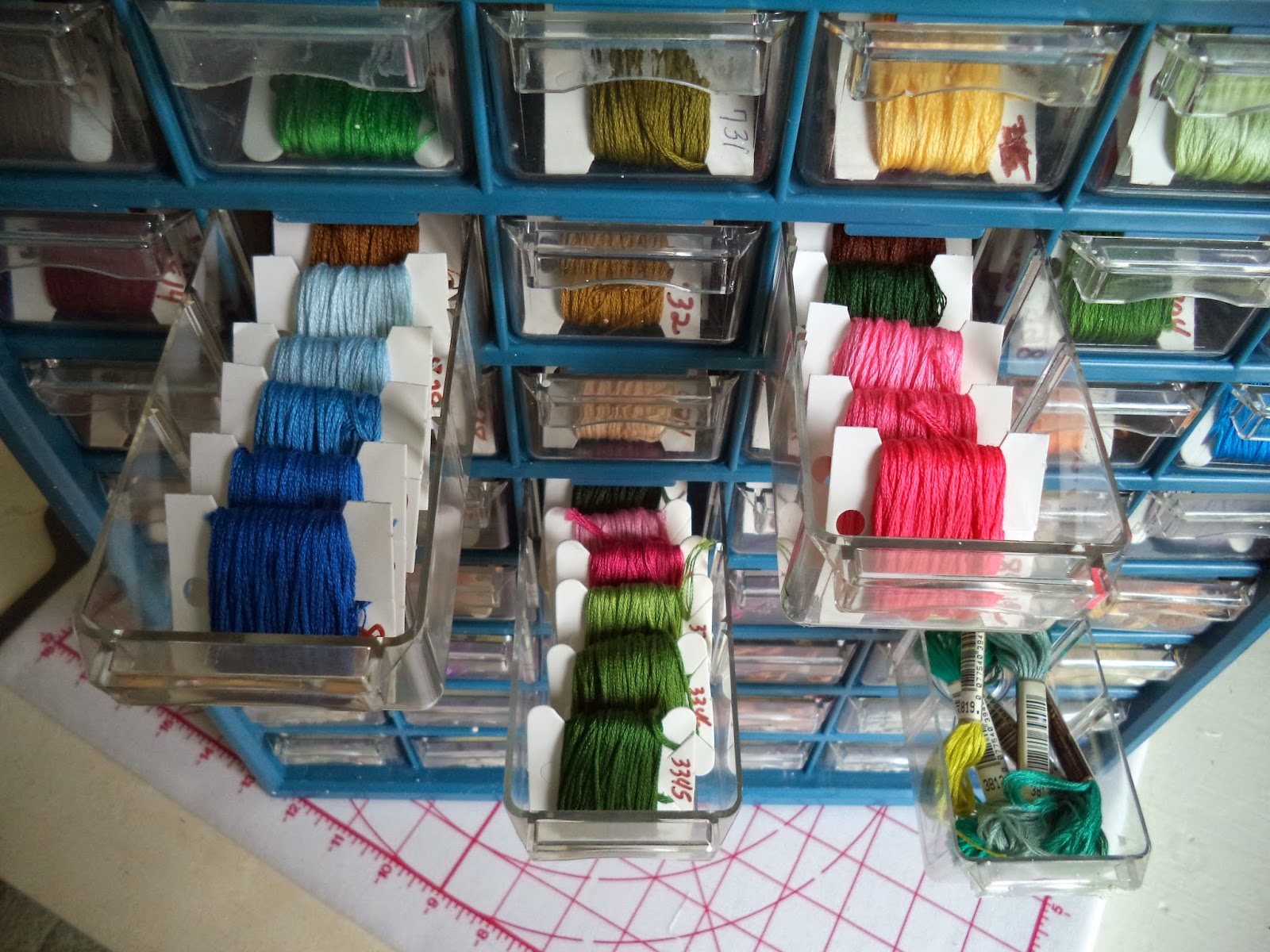 Plenty of room for all the floss wrapped around those little cardboard holders. 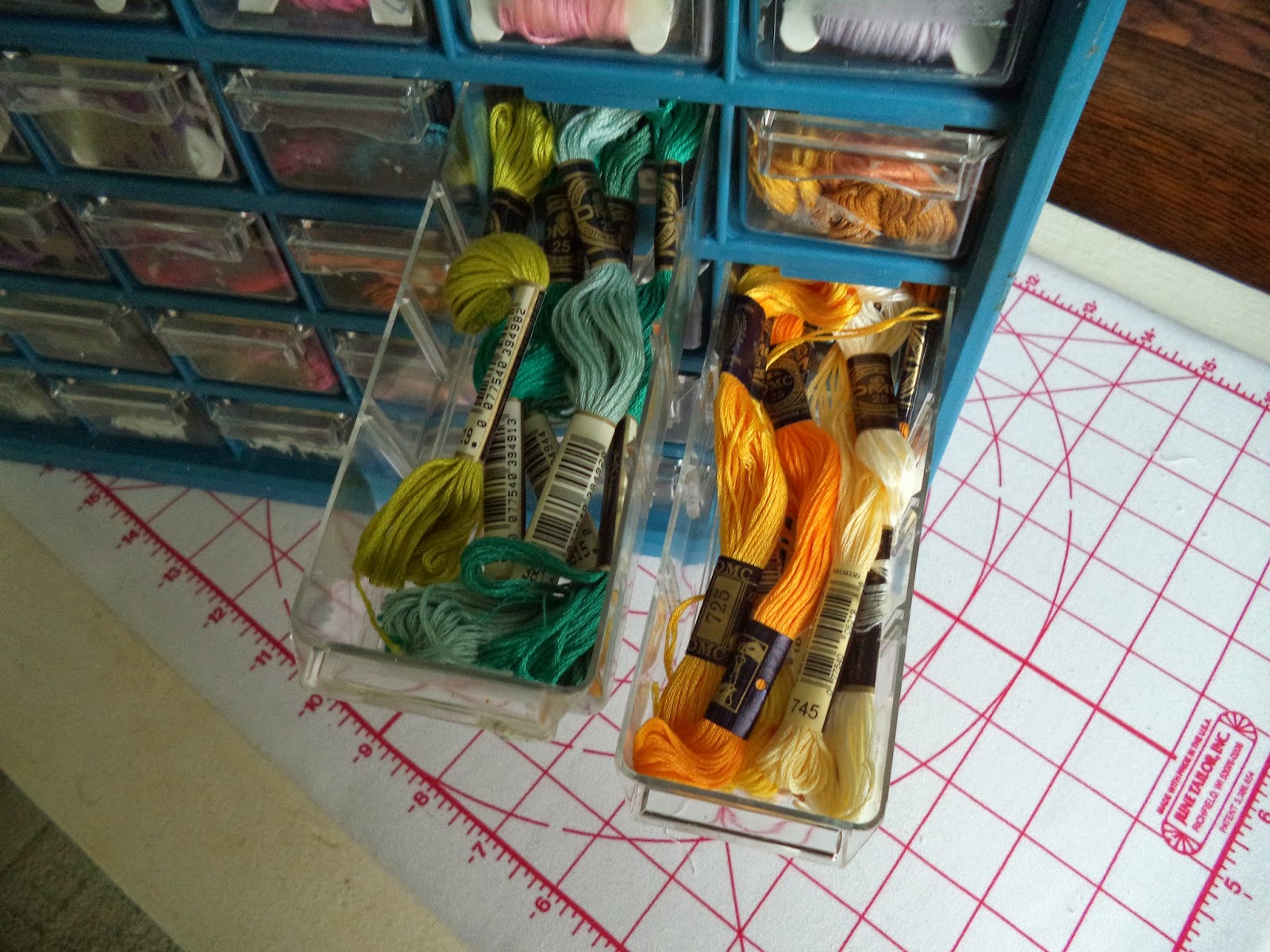 Plus enough room for the floss that I haven't put around the holders and any extra skeins.  There was even a drawer for the extra cardboard holders.


On another note, the birds are coming back.  This morning we had an indigo bunting join the group.  They are such a beautiful blue. 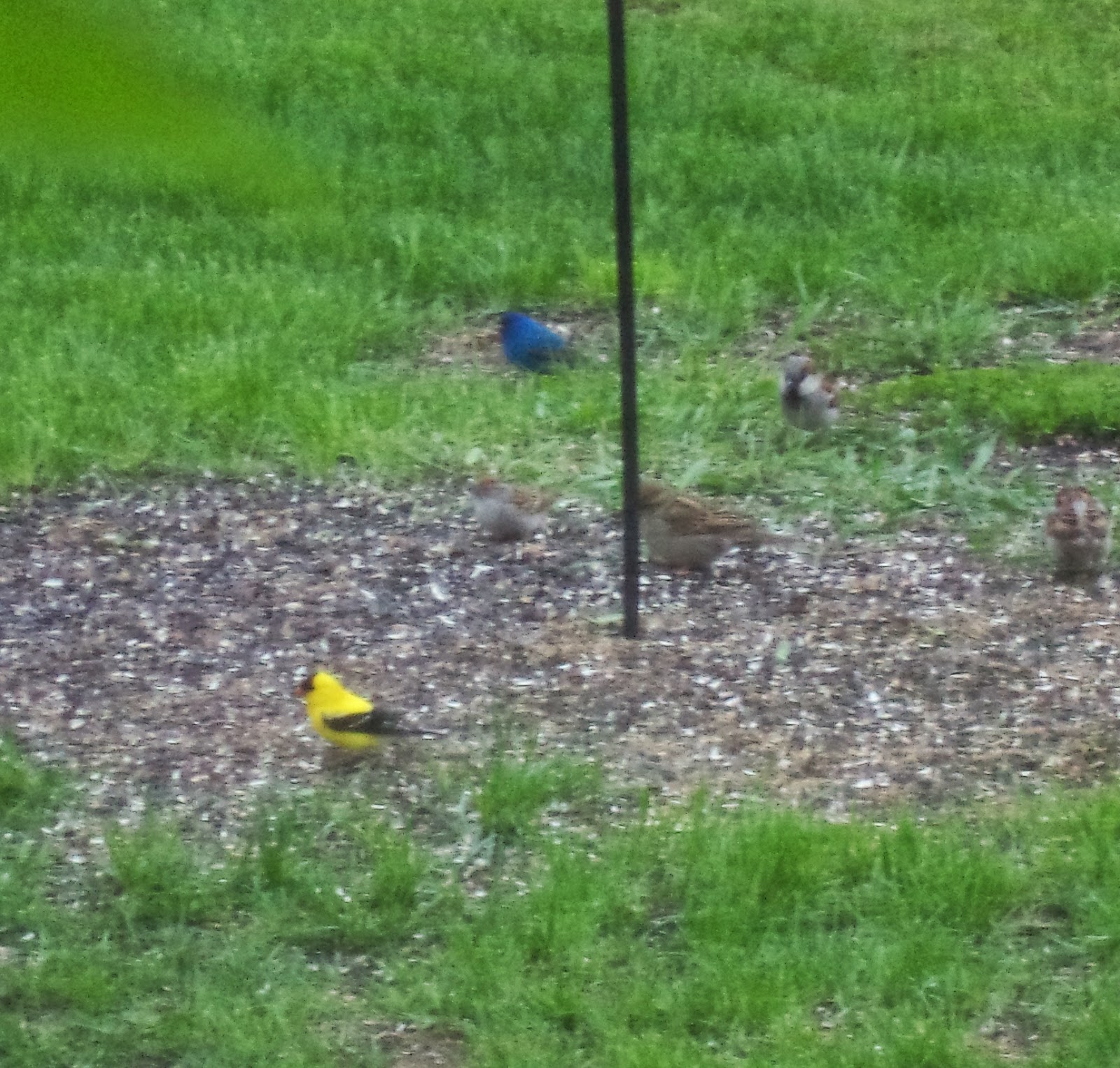 I am so happy that Spring has arrived!  We've planted seed potatoes and onion sets, as well as carrots and lettuce.  Hope to get the tomato, pepper, and artichoke seedlings set out this weekend.  Then the rest in a week or so.

I finally finished the quilt top I started at my friend's house two weeks ago. 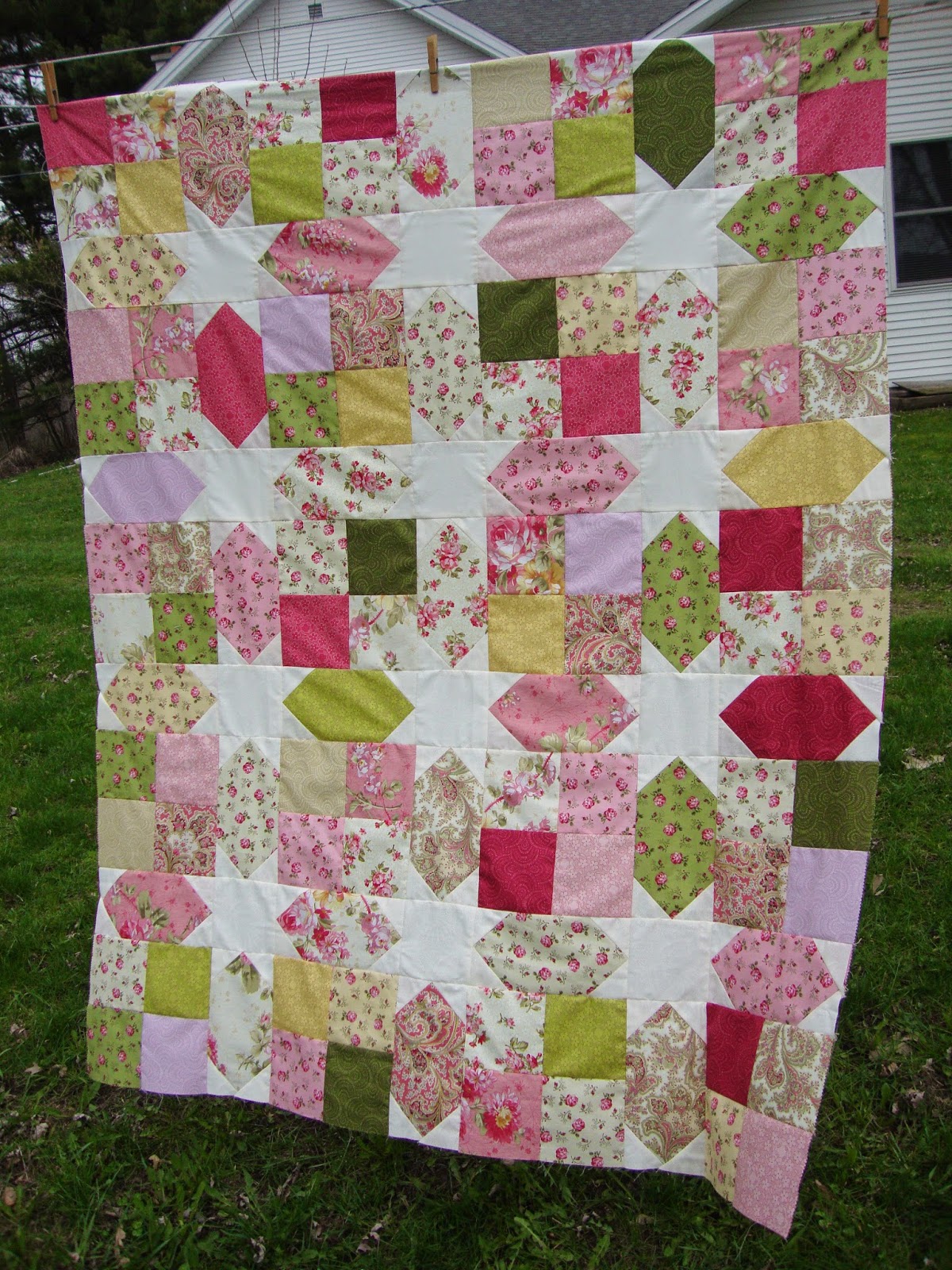 It's made with one layer cake plus the fabric for the stars.  This one doesn't have a border, so what's left is to find something in my stash for the backing and then get it sandwiched, quilted, and bound.


Linking up with Sew Darn Crafty


Posted by Meadowcreek at 8:24 PM No comments:

Well, I haven't accomplished much in terms of quilting lately.  I am working on a new quilt top but am not far enough along to show any pictures.  Perhaps later this week.

I've had this hanging on my quilting/sewing room wall for several years and sometimes I think I might be more of a fabric collector than a quilter/sewer. 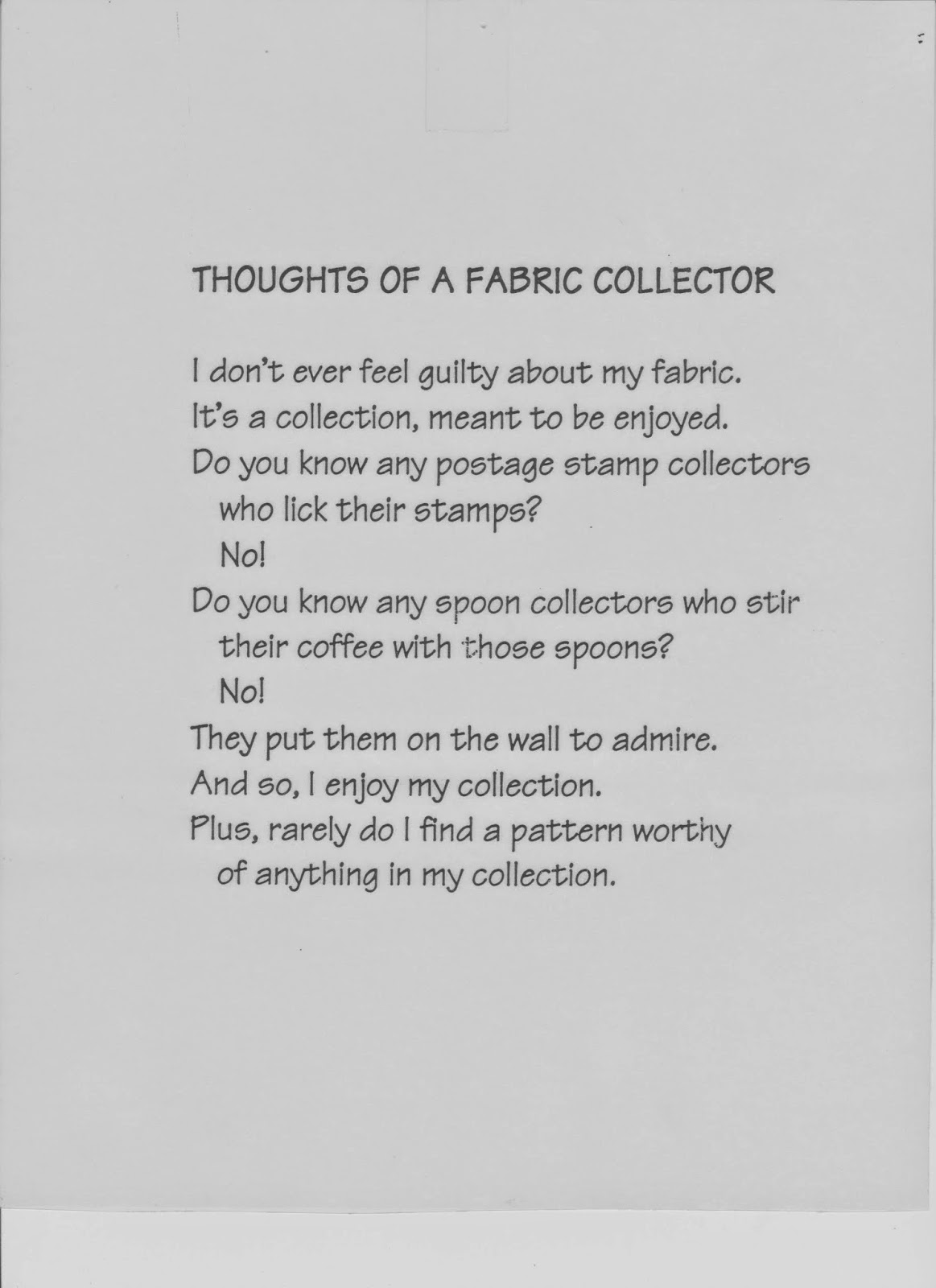 I do love beautiful fabrics, and I often find it hard to cut them up to use in a quilt.


Spring has finally arrived here in the northern half of Wisconsin, so I've been outside working in the yard.  It is so nice to be able to go out without a jacket, etc.  I love this time of year when everything looks so fresh and new!

Happy Spring to all of you!

Posted by Meadowcreek at 1:03 PM No comments: