I was out of town last week having lots of fun.  Can you guess where?? 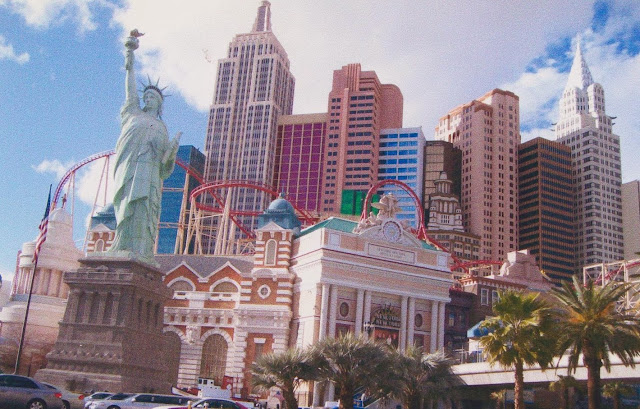 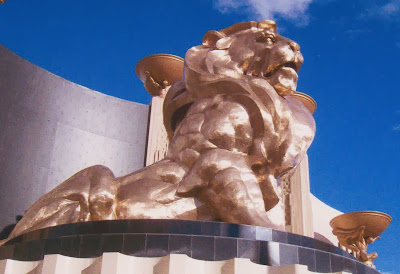 Yes, Las Vegas!!  Our younger son lives there; I was visiting and helping him move to a new apartment.  We got the moving out of the way at the beginning of the week.  The top picture is New York New York casino and the middle one is the lion at the MGM Grand casino.

The bottom picture of part of the strip was taken from the Springs Preserve, a large area right in the city which comprises the Nevada State Museum, a natural history museum, and a desert living center.  On the left is the Stratosphere, which is on the north end of the strip.  The other buildings are part of the strip also, not close enough on this picture to identify.

One day we went to the Bellagio on the strip and had brunch--very good!  Then we walked up and down about half of the strip, wandering around in a couple of casinos.  I bet a few dollars, made a few and lost a few, so ended up about even.


The next day we drove five hours to the south rim of the Grand Canyon. 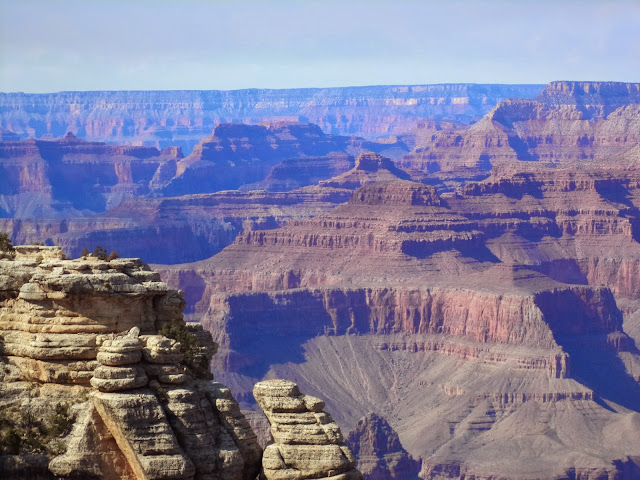 I lived in Denver for several years and never made it to the Grand Canyon; now that I live twice as far away I finally got to see it.  Even though I had seen pictures of it, they simply don't do it justice.  In person it is just awesome!  A magnificent treasure that we are lucky to have in this country.  If you have never seen it in person, put it on your bucket list.  It was worth every minute of the ten-hour round-trip drive. 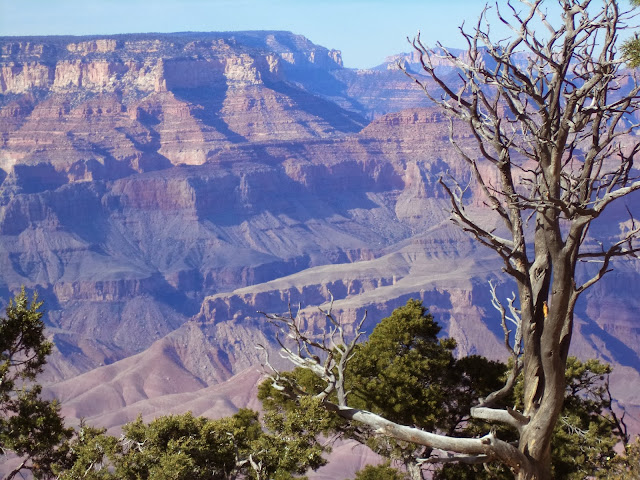 The sky over the canyon was the most beautiful blue. 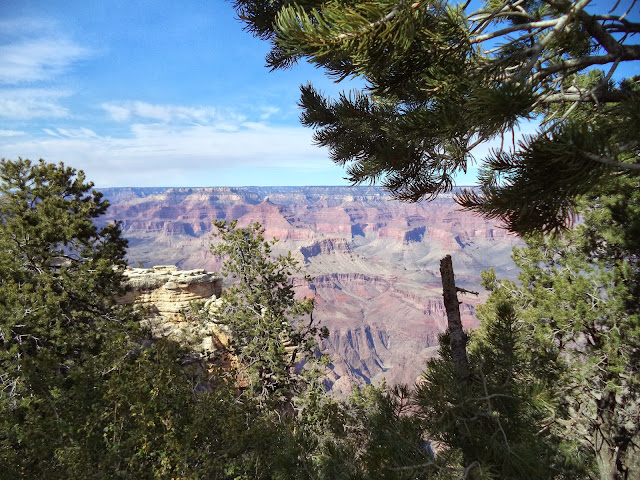 Here is the Colorado River at the bottom of the canyon. 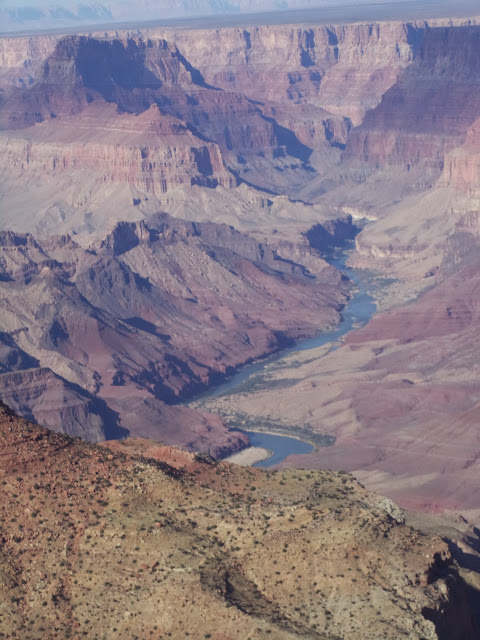 We also spent some time downtown on Fremont Street.  There is a huge TV screen above about two blocks of the street; it's billed as the largest tv screen in the world.   Las Vegas is nothing if not excessive at most everything they do.  At night there's a light show on this screen and the colored lights bounce and wave across it.  It's very pretty to watch. 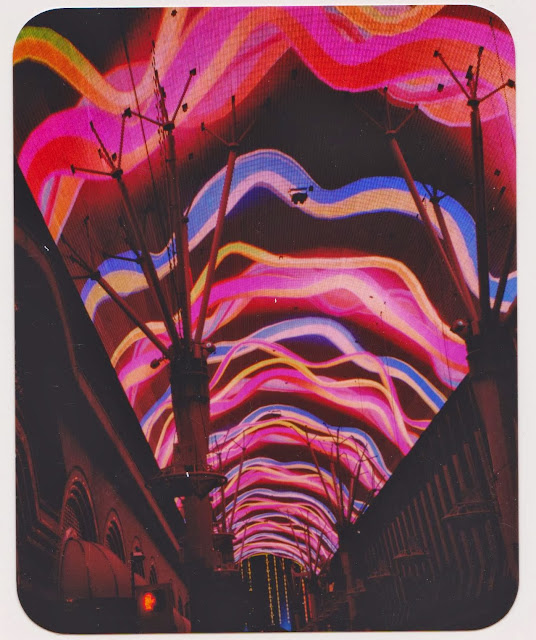 We ate at a nice Mexican restaurant a block or two from here.  The area adjacent to the Fremont Street "mall area" is slowly being refurbished.  We also toured the Mob Museum, three floors of pictures, videos, and information about the Las Vegas/Mob connection.  It was very interesting.

I had such a wonderful time visiting my son and seeing Las Vegas and the area.


Something else wonderful:  I ordered a jelly roll from the Missouri Star Quilt Company, and it has arrived.  It's from Wyndham Fabrics, called Christmas Peace. 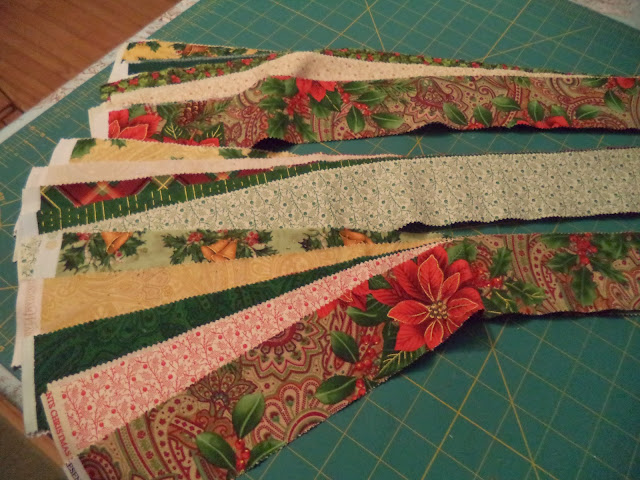 I'm either going to make the Jelly Roll Jam pattern with it or do the one that Jenny Doan shows on the Missouri Star Quilt Company's website.

I really need to avoid opening their Daily Deal emails because I would end up buying more fabric than I should.  Is it possible to have too much fabric??  Umm, probably not!

Posted by Meadowcreek at 2:48 PM No comments:

About three or four months ago, I was able to buy a new sewing machine.  I've had a Viking Lily for close to 15 years.  It has been a very good machine, but I wanted one with a bigger throat area.  I spent about a year and a half researching different brands--looking on quilt forums and talking to company reps at quilt shows.

At the beginning of this search, I was pretty sure I wanted another Viking.  However, over time I heard nothing but positive comments about Janome.  There happens to be a Janome dealer here in town; he is the person I've taken my machines to for cleaning and maintenance as well as any repairs needed.  My mom used to take her Elna to him for servicing also.  He does a great job.

So in the end, I decided on a Janome Horizon 8900QCP and have no regrets at all.  It is a fantastic machine! 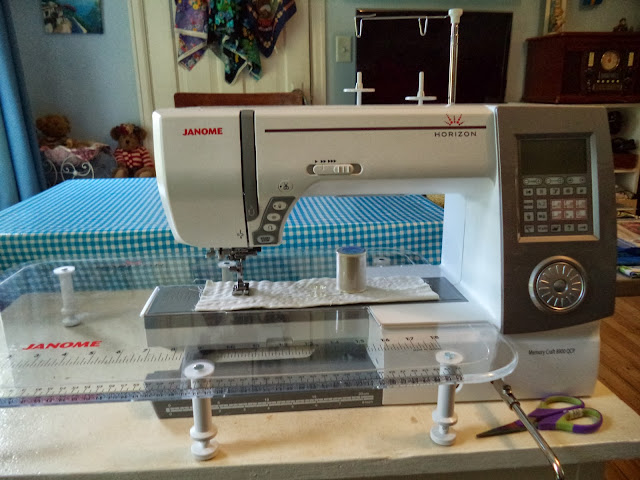 Some of the features I especially like are the needle threader (my eyes don't work as well as they used to, so this is very nice), the thread cutter (which is also a big thread saver), and the exterior spool holder.  The foot pedal is extra wide, there are two needle plates that are so easy to change, and the machine has 4 or 5 lights to make sewing and quilting much easier.  The acrylic extension table came with it, and after using this I would never want to be without one again.  The extra space and support it gives are wonderful. 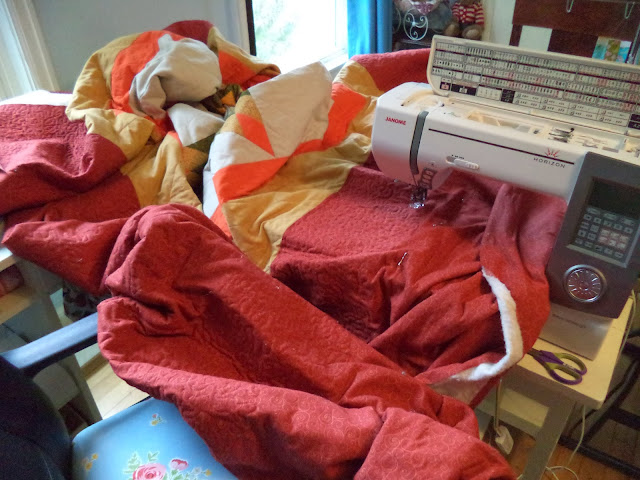 After working on an almost king-size quilt, the thing I really love about this sewing machine is the 11 inch throat area.  It allowed me to do the quilting with basically no struggle.  In this picture, I am working on the outer border, but even when I was quilting in the middle of the quilt, the large throat area made it much easier than the 7 inch on my Viking.  I would never have attempted to quilt something so large on that machine.  The extra 4 inches on this one makes a huge difference.

There is also a knee lift, which I'm just beginning to use.  There are so many more features that I haven't even had time to explore yet.  The cost of this sewing machine was a bit higher than I originally wanted to pay, but I am so glad I didn't settle for anything less than what I really wanted.


I am linking up with http://www.sewmamasew.com/2013/10/sewing-machine-reviews

The Lone Star quilt I've been working on for a couple of months is finished!  It ended up measuring about 100" x 114". 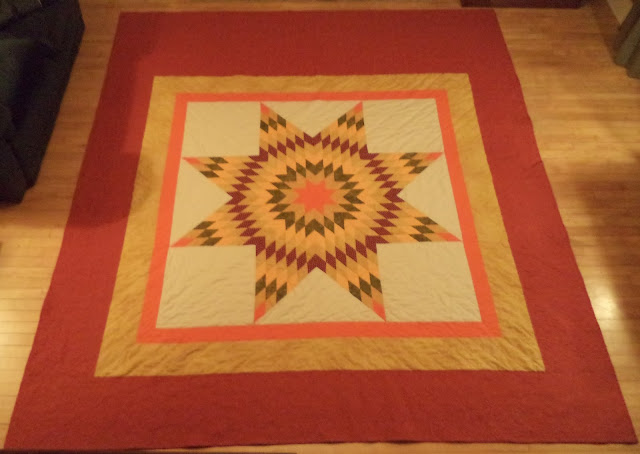 Here it is laid out on the living room floor just to give you an idea of its size.  It's for a queen size bed, but she wanted it to be the size of a bedspread so it would go to the floor and be able to be tucked under the pillows. 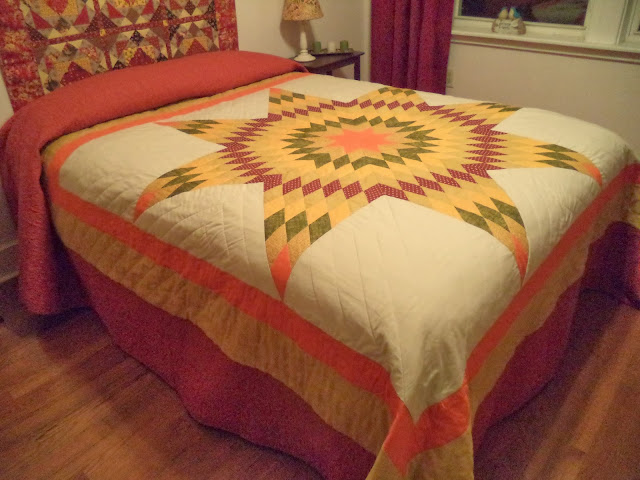 Here it's on a double bed.  On her queen, the entire star will be on top of the bed rather than hanging over.  Also, her bed is not quite as high as this one, so the length on it should be fine also. 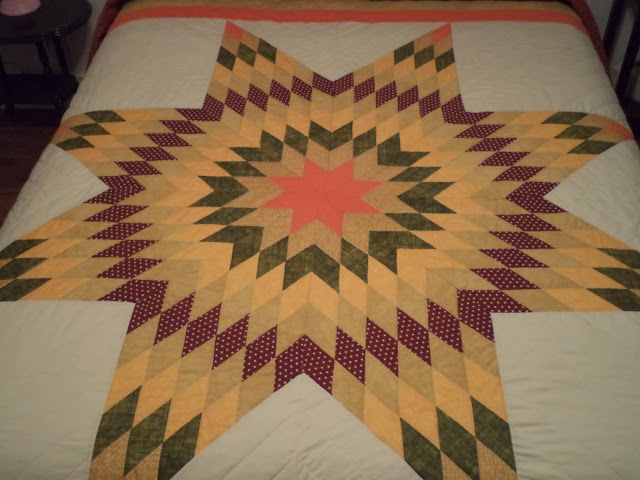 A close-up of the star.  The colors are actually brighter than they appear in this picture.

I did some stitch-in-the-ditch and straight-line quilting as well as a pattern on the first border and meandering on the third border. 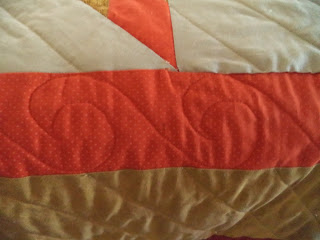 A close-up of the quilting on the first border.


This quilt has been fun to make as well as a challenge.  I just may make one of these for myself--in different colors, though.


Posted by Meadowcreek at 8:02 PM No comments:

A Break and a Narrowed Focus

Hi,
I've been missing in blogland for a few weeks, as you may have noticed.  What it boils down to is that I've run out of things to write about as far as the garden, canning, animals, etc. are concerned.  The garden and canning season is about over, and we now have only three chickens.  So, there's really not much of interest there, and my personal focus is elsewhere.

After 1 1/2 years this blog will now have a main focus (a niche blog, if you will) rather than general "what's happening in many parts of life around here" posts.  That main focus will be quilting and things related to quilting/sewing, with maybe just an occasional post about other topics.  I've been sewing for almost my entire life and quilting for the past 15-20 years.  It's something I love doing, and now that I'm spending much more time quilting than gardening, farming, or anything else, it seems to be an appropriate new direction for my blog.

If you've been reading this blog to keep up-to-date on our gardening, animals, canning, etc. adventures, then I apologize about the change.

But, if you are interested in quilting, look for the beginning of this re-focused blog in the next few days.

Posted by Meadowcreek at 11:36 AM No comments: