I've seen several sewing studios with large pressing boards and have wanted to make one.  My room is about 13'x15', a decent size, but with everything else in there, I couldn't seem to find a good spot to put one. 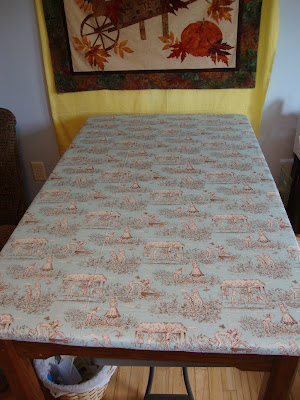 My cutting table is 30"x50".  At first I just thought of getting some plywood to cover and then putting it on the table when I needed to press larger things.  The problem with that is where to put it when I'm not using it. 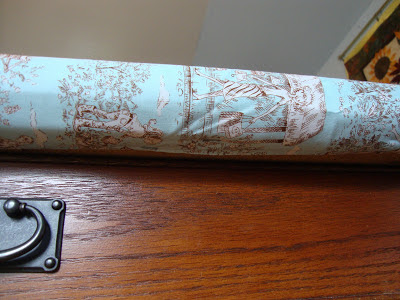 The solution:  put 2 layers of batting and the layer of fabric on the cutting table itself.  I wrapped it around the edges and stapled it underneath.  Now I have a nice big area for pressing larger items and I don't have to store it anywhere when it's not being used. 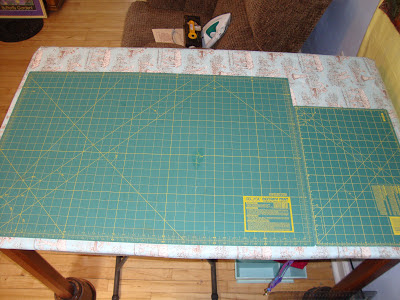 When it's not in use, I just put the cutting mats on top of it.  So now it's a multipurpose cutting/pressing table.  Yea!


I have to tell you about a real bargain I got at a garage sale a week or so ago.  This is a Rowenta  Powerglide iron that I paid $2. for.  Not sure how much they are new, but much more than what I paid. 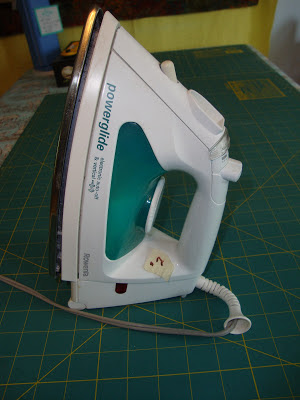 I also have this Rowenta Professional iron that I snagged at a garage sale 3 years ago for $5.  This would have been close to $100 new.  Both of these irons work beautifully. 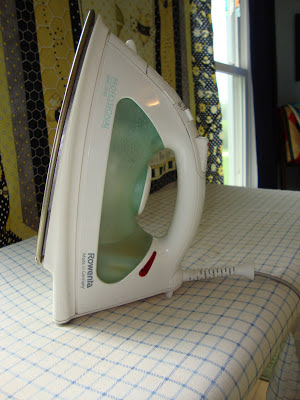 I love garage sales!  You just never know what great things you're going to find.

Later this week, I'll try to do a post with a tour of my sewing studio.

Remembering those who have given the ultimate sacrifice for our country. 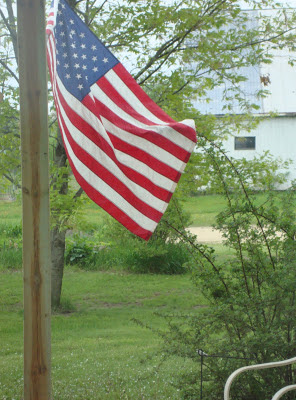 Posted by Meadowcreek at 2:25 PM No comments:

Well, we are finally able to do some gardening.  Our perennial food plants are up and looking nice. 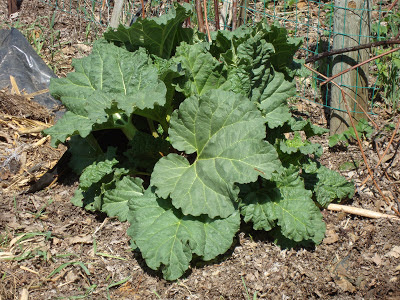 The rhubarb is almost ready to start picking.  I'm going to try cooking it with honey this year instead of sugar. 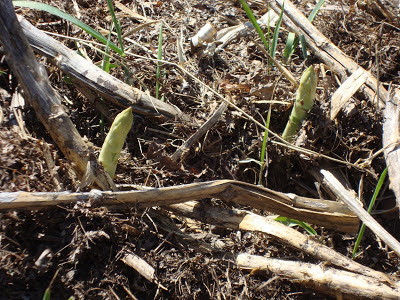 A couple of asparagus stalks are just starting to come up through the mulch.  We love to steam fresh asparagus and then add butter.  Yum! 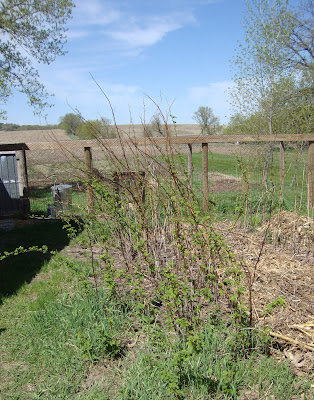 Leaves on the raspberries.  We won't have fruit until early August, but fresh picked raspberries are a real treat worth waiting for.  Mr. M doesn't eat them because he doesn't like the seeds, so these are all mine. 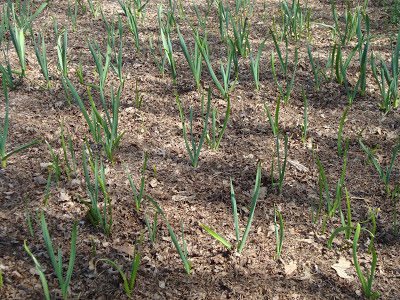 This is part of the garlic patch that Mr. M planted last fall.  We use lots of garlic in our cooking, so it's nice to have our own that's home-grown. 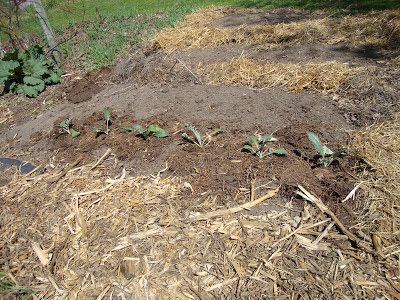 These are new globe artichoke plants that Mr. M started a few weeks ago.  The first year we tried planting artichokes, they actually survived our winter up here.  They are perennials in warmer parts of the country, but not here normally. Those from last year didn't survive the winter.  These new plants should give us artichokes in a couple of months.  We boil them in water and then just dip the leaves and chokes in butter.  A real treat!


We planted onion sets, peas, and lettuce in the past couple of days.  We also got the fenced enclosure set up for the broccoli and Brussels sprouts to keep out the local rabbit population which seems to particularly love these kinds of plants.  For the first time last year, we had resident wrens eating any cabbage worms that were on these plants.  We saw them bringing the worms to the birdhouse to feed their young.  For the first time, we had no worms on the broccoli and hope the wrens return this year to do the same thing.

Once the soil warms up a bit, we'll be planting the rest of the vegetable seeds. 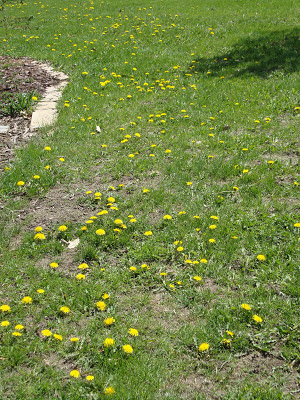 And, of course, there is the beginning of a nice crop of pretty yellow flowers.  I know that most people do their best to get rid of dandelions, and the plants do tend to grow and multiply pretty vigorously, but I really love to look at a yard full of them.  Maybe it's because yellow is one of my favorite colors. 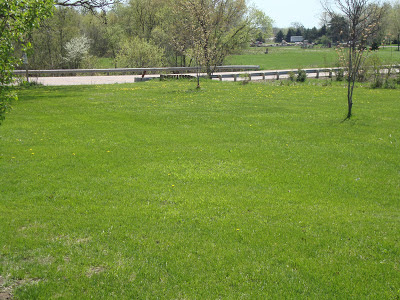 And after such a long winter with lots of snow even into the first couple days of May, it's so nice to look at grass again.


I love this time of year.  Everything seems so fresh and new.  The grass has that bright spring green look to it as opposed to the darker green of summer.  And the new leaves on trees and shrubs help to reinforce the idea of rebirth, which is what spring is all about after a long winter.

Posted by Meadowcreek at 7:32 AM No comments:

Another snowy day at our place.  We have about 6 or 7 inches of really wet snow.  Fortunately, the roads are just wet right now and not slippery.


Just a few days ago my friend and I were in Paducah, Kentucky, for the AQS quilt show.  We had been planning this trip for about two years and finally made it.  We did a little side trip on the way down and went to the Fons and Porter shop in Winterset, Iowa, as well as John Wayne's birthplace there. 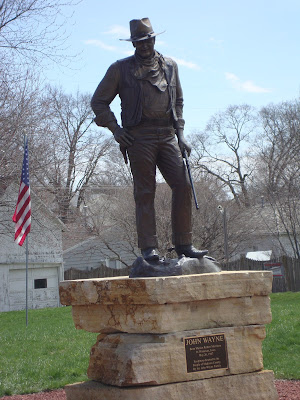 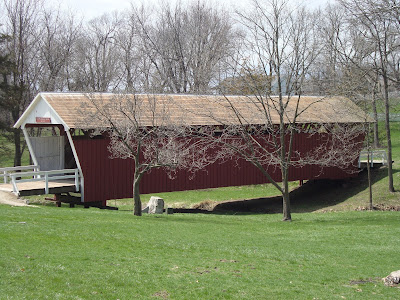 Next stop was Missouri Star Quilt Company in Hamilton, Missouri, then to the Laura Ingalls Wilder and Almonzo Wilder home in Mansfield, Missouri, in the Ozarks. 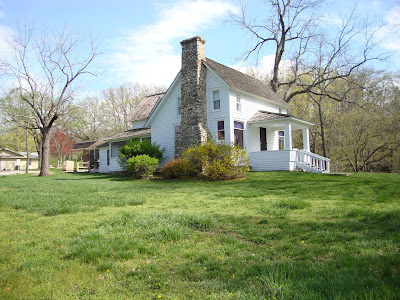 While in the Mansfield area, we went to visit the Baker Creek Heirloom Seed Company.  This is who Mr. M and I buy all of our vegetable seeds from.  It was fun being there and seeing the little town they have set up, called Bakerville.  There are several old buildings such as a hotel, general store, and apothecary, besides the store where they sell their seeds. 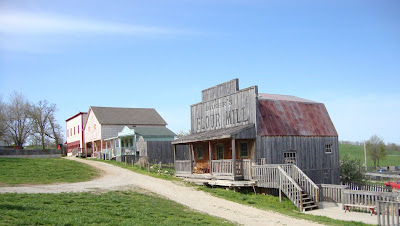 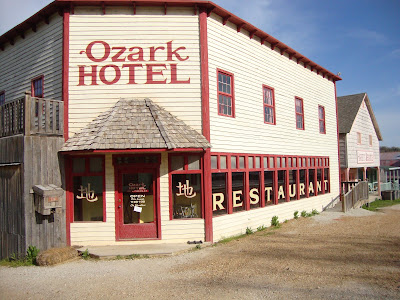 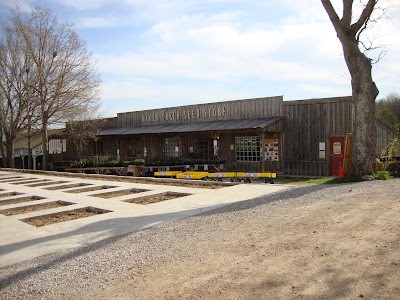 We saw so many beautiful redbud trees in bloom in that part of Missouri. 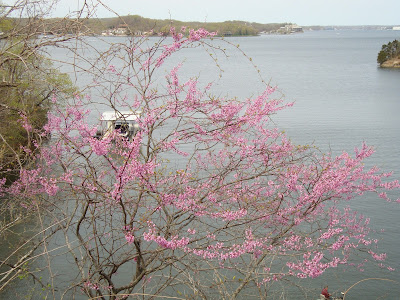 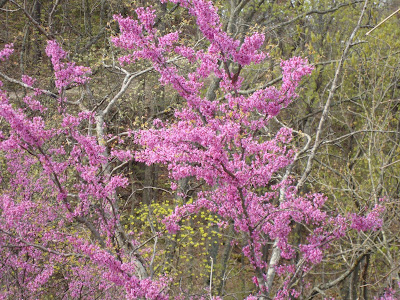 We arrived in Paducah, Kentucky, a day early, but that allowed us to become familiar with where the quilt show and other attractions were before the big rush.  The quilt show was wonderful; there were over 200 vendors plus so many absolutely beautiful quilts.  I would love to show you some pictures of the quilts, but we were only allowed to photograph them on the condition that we would not put them on the internet.

We spent a few hours at Hancocks of Paducah, especially in their backroom sale area. 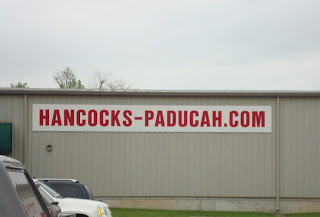 One day we took the Dogwood Tour, which usually happens earlier, but this year we were lucky enough to be there during the later time the dogwoods were in bloom.  Many people have lights shining on their trees and they enter the contest to see if their dogwood might win as best of the year.
This picture is not only a dogwood but a beautiful wisteria as well. 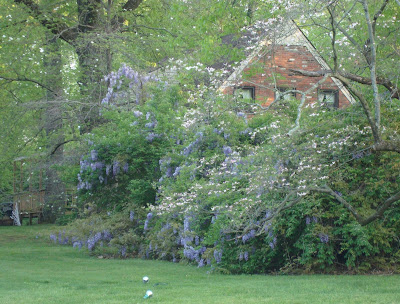 Eleanor Burns (Quilt in a Day) was in Paducah all four days of the show and gave three 1 1/2 hour shows of her own each day focusing on quilts made from her new book. 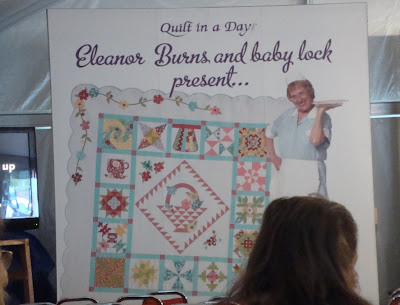 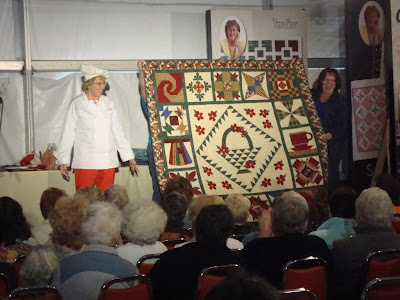 It was a lot of fun; she's such a wonderful, down-to-earth person.

We also spent a while looking at the murals on the flood wall.  Paducah is on the Ohio River, right where the Tennessee River joins it.  They've had some pretty bad floods in the past, so several years ago a flood wall was built.  Then an artist painted several murals on it about the history of the city. 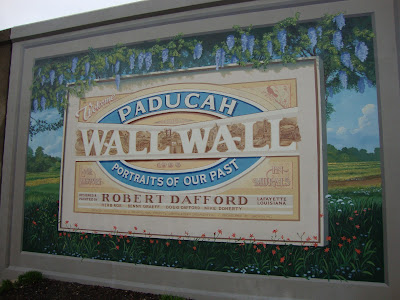 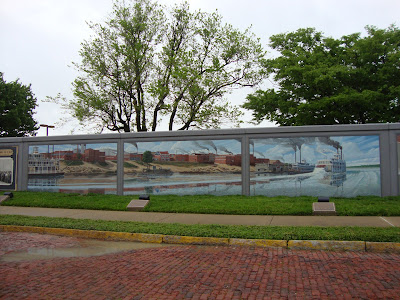 We were in Paducah for five days so we had a lot of time to enjoy the beauty of the area, but were also very impressed by the friendliness and hospitality of all of the people we met there.  We had heard that those who live in the South are so very nice, and we found it to be true.

We had such a great time and may go back again someday (or maybe to another quilt show--Houston, next time??), but it's nice to be back home, too (even though we have snow and no leaves on the trees or flowers in bloom).

Posted by Meadowcreek at 5:05 PM 2 comments: